Roddin&Racin NW is a print publication covering Oregon and Washington primarily. As of late, circulation and distribution becomes increasingly challenging, We are living in a new era. The Cervesa Virus has been taking it's toll worldwide! Times have been hard for the magazine as well, not to mention it's advertisers as small businesses struggle to remain alive. The publisher continues to soldier on, however. We all hope for some modicum of a turnaround before too many more businesses are lost.

We invite you to peruse the latest issue online HERE

Posted by Gearheadsworld at 11:18 PM No comments:

Posted by Gearheadsworld at 7:08 PM No comments:

Emi Harmony is carrying on with tradition as set by earlier members of the Women of Motorsports modeling team.

Emi is from Hungary and has busied herself enjoying American life. When not working hard in her skin care studio, she pursues other avocations such as car modeling.

Emi attended her first Monster Jam show. She said there is nothing like this in Hungary 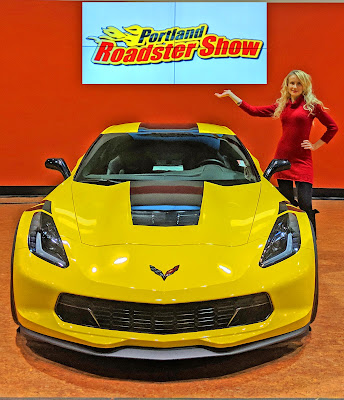 Portland Roadster Show was a new adventure for Emi. She has not seen all of these colorful cars


Emi's portfolio of pics is being added to the Facebook Page in the Women of Motorsports Album
https://www.facebook.com/pg/GearHeadSite/photos/?tab=album&album_id=1615565685146740

As you can see here, Emi is not an Asian car model or a Rockabilly model. Emi is relocating to SoCal. Any there who may find themselves in need of a mature model/spokeswoman, her services will be available.
Posted by Gearheadsworld at 4:21 PM No comments:

Pro Stock Icon, Bob Glidden Leaves us in a Trail of Smoke 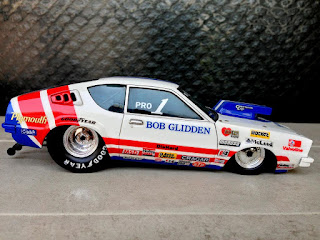 Bob Glidden started as a dealership line mechanic and proceeded to rise to fame and fortune in the highly competitive NHRA Pro Stock ranks. He started it all in a lowly Ford Pinto of all things. We were reluctant to report on this earlier due to inaccurate reports of his demise. However it is now official.

During his initial rise, this writer was a Navy sailor aboard the USS Chicago on WESTPAC, Subic Bay, Philippine Islands (does anybody remember  Alongapo City). I was reading of his exploits in the pages of Car Craft and National Dragster, as he took charge of Pro Stock, winning back-to-back championships in 1974 and 1975. This guy literally wrenched his way to fame and  stardom with hands on mechanical expertise. 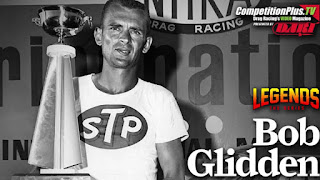 Him and his wife, Etta then went on a winning streak in Pro Stock that is unparalleled. They made numerous appearances during the Heyday of big time, professional drag racing at Portland International Raceway.

They had two sons who went on to make their marks in NHRA drag racing as well. I believe it was Billy Glidden who was banned from NHRA for life for using nitrous in Pro Stock.

Billy and Rusty went on to make their marks in Outlaw door car racing with a Mustang. Bob Sr became heavily involved with that as well. The Glidden name continues to storm on in those ranks.

We are not quite sure what it was but as in life and in death - it took him quick. Bob Glidden was 73.

SIDENOTE:
The Ford Pintos came to be in the early 70s along with their cousins, the Chevy Vega (and other GM iterations). These cars were already in place during the first Arab Embargo of '73 as this gas monkey was pumping gas like a maniac down at the Ross Isl. Exxon. Who remembers the endless gas lines, the odd/even plate number sales days and the "Out Of Gas" signs? Any way, these cheaply built econocars were the Big 3's answer to all the hysteria that led to the decline of the American musclecar during that time. 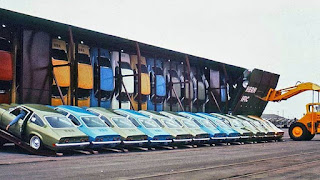 Anyway these little babies were built cheap and light. They were transported stacked on one another. Of course these little throwaway cars became great drag racers. You will have a hard time seeing many of them on the streets these days but you will still find plenty of them at dragstrips everywhere. This era ultimately led this writer to hump onboard the Pro Street band wagon with the creation of the "Avenger" Vega pictured elsewhere in this Blog (click the Street Racer tab at the top of this page).
'nuff said 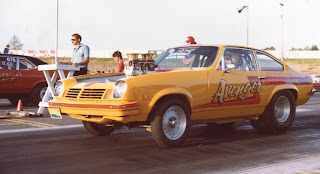 Posted by Gearheadsworld at 5:04 PM No comments:

2017:
One thing that has been happening up here in GearHeadsWorld is a little sand racing. Fellow GearHead, Steveo was looking for something to do with some extra horsepower hanging around in his shop. Sand Racing was a good option for some Outlaw style racing. The Albany MX facility is a way cool track. They have few rules and there is grudge racing and list racing to be had. Here is the latest vid. Unfortunately, GooTube has somehow, mysteriously shortened the vid from 15 min. to 4 min. We are working on that .... :-(  And of course you can always enlarge these vids to full screen simply by clicking on the "square" in the lower right corner.

A shameless plug for us. If you have special needs for your business, race team or special car, you might consider humble us. Contact us for your Photography, Video, Copy Writing, Social Web needs or whatever ... Getting married?  Whatever - no need to pay a ton!

Down below in our #BaddAzzRidez List you will find our adventures with Stevo's Blown, Alky Dragster called, Suddenly in 2016

Posted by Gearheadsworld at 3:58 PM No comments:

SEMA 2016: The Series - #BaddAzzSemaCarz and #Street Outlaws are all present

Below is the one OKC Street Outlaw vid we have produced this year. We were forced to severely curtail production on these vids after the Great Google Reset that ocurred prior to the SEMA2016 Show. This reset of the YouTube Algorithm all but destroyed the amount of views on our YouTube channel as well as those of thousands of other Content Creators. As Youtube Partners, we depend upon the monetization of our vids to earn revenue which is very difficult - but now - nearly impossible if you do not meet their ever changing parameters. Out of all the SEMA vids below, only two earned enough revenue to barely cover expenses! Nothing at all like the year before. Google gobbled up YouTube and sure enough, it was not long before they ruined it for many of us OGs.

But unfortunately, this is the way of the World these days. The Corporate way is to screw over the common people. Because they know that they and their corrupt political partners can easily run roughshod over all of the Sheople - and we will do NOTHING to stop them  :-(  Sad but true!

The analytics and metrics that determine how many views a given vid - or channel - will receive is far too complicated to explain here. I will just say this - Not every one knows that the amount of views any given vid will get has little to do with popularity or subscribers or anything else. The views are determined by the "All knowing" Google Algorithm and the little brother YouTube Algorithm. We are talking about Artificial Intelligence, machine learning and all of that! But it is constantly tweaked by humans and what they do is top secret. In the end, those of us just trying to work our niche get hit over and over. GooTube is shooting for a younger and younger crowd and they are shooting for bigger and bigger fish. They don't want the older ones who were in it from the beginning. They will just kick us out. Those of us who continue are forced to work for slave wages basically.

Hundreds of thousands of views were stolen from this channel by the Reset. Many viewers around the world will not see the below vids because Google hides them. And this channel lost thousands of dollars of revenue as a result. To me - that is criminal theft.!

UPDATE: Now here is the latest.for 2017: Here it is July 4th. and I posted a 15 min. sand racing vid 2 days ago. All of a sudden it is mysteriously shortened to 4 minutes!  WTF, yeah, have no clue what happened here this time  :-(   We are a ways from the street action down in OKC but there are other ways for us to make noise. Fellow GearHead Steveo has been throwing some heavy horsepower to the sand and we've been making vids of that. Now we have another vid mysteriously wrecked. There is simply no excuse for that.  :-(

UPDATE: We have since found this prob. The fault lies with the YouTube Editor, specifically the "Enhancements" feature. We found this on our own, with no help from the often useless ,YouTube and Google Forums. This wreaks havoc with the analytics resulting in down grading the ranking by the Algorithm and permanently destroys the vid's ability to achieve it's full potential of views and revenue. Essentially, it more or less sends the vid off to purgatory where few enthusiasts who might enjoy viewing it, will ever find it.


Here is our first vid of 2017 uploaded in July. It still gets views here and there.

Vid #1 with FarmTruck, AZN and much more

Vid #2: The fantastic SEMA Show continues and we have Chief & Shawn in the house talking

Vid #3: Chevrolet unveils the brand new 2017 COPO Camaro and we are there to get the lowdown

Vid #4: None other than Mad Max on the scene. And we have Jeff Lutz give us the lowdown

Vid #5: FarmTruck & AZN are here but even more Joshington the mechanic gives us the lowdown

Vid #6: Kye Kelley is in the house along with Shocker and we take a close look before the hext race

Vid #7: Our most special time as I revisit with the one and only Linda Vaughn after so many years

Vid #8: More great coverage and then its good times with AJ from OverHaulin. What's not to like?

Vid #9: Friday comes and finally it's time for SEMA Ignited. And check out Tracy Rhodes  :-)

Vid # 10: We introduce a brand new Outlaw. Check out the Sorceress, one of a different stripe.
Note: It is now mid 2017 and this vid far and away ended up to be our best vid from SEMA, with well over 100K views. This vid covered all of our SEMA trip expenses We can't say why for sure ... it is just the way the Algorithm worked.

Vid# 11: And so much for the dirty dozen ... Say What? Anyway here is more tech on this Sorceress
Posted by Gearheadsworld at 8:46 PM No comments: